Internationally recognised and award winning artist Christopher Langley has been painting since childhood; influenced by his father who painted in oils. Langley became a professional artist in 2012, when he opened his first solo exhibition in Pontypridd, the town of his birth.

Christopher works in various media, from oil painting to digital techniques depending on subject;  building on his experiences, experimenting with styles and concepts.  The results are a unique variety of original and vibrant works.

Chris’ artwork has gained awareness within the media and some of South Wales’s best public establishments, such as The Celtic Manor Resort and David Lloyd Tennis Centre, Cardiff, where his work is displayed. He has appeared on S4C’s Heno for his ‘Art of Cardiff Public Houses –  Past Present’ series, BBC Radio Wales, BBC On Line and the South Wales Argus, where he judges the Prettiest Pet Contest. 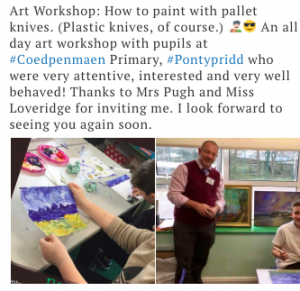 Christopher brings a fresh interpretation to his subjects. He says: “There have been many paintings of Cardiff Landmarks and Castle Coch, for example, but none have used the colour combination I bring to the subject. I find great inspiration in many things about Wales; the people and the towns; the unique land and seascapes” Chris’ recent series on Tenby have been very well received.

He is influenced by David Hockney, Gillian McDonald, Barry Hilton and Welsh artist Rob Piercy. Chris is a member of the IAS, Royal Television Society (RTS) and a committee member of the South Wales Art Society (SWAS),