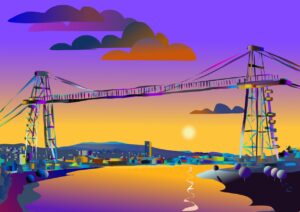 In 1900, Newport in South Wales was a very busy port.  Much of this trade centred up river from where the Transporter Bridge now stands.

Industry, at that time was expanding on the east side of the river. However, as the population of Newport was largely based on the west side, it meant a four mile walk to cross the river via the town bridge to get to work.

A ferry operated which connected the two sides; but the ever changing times, coupled with the extreme rise and fall of the Bristol channel tide, meant the ferry was not a practical method of crossing. Indeed, there had been a number of fatal accidents.

Borough Engineer Robert Haynes heard of new innovative bridges being built on the continent. He encouraged the local council to visit a newly built transporter bridge at Rouen in France.

A transporter bridge offered an economical solution. Tunnelling was technically difficult and expensive. A conventional bridge required a very long approach ramp to gain enough height to maintain a waterway for the tall ships of the day. The solution could only be a transporter bridge.

Parliamentary approval to build the bridge was given in 1900 and work began in 1902.  The bridge cost £98,000 to complete and was opened on September 12 1906 by Lord Tredegar of Tredegar House.

Now a Welsh national icon representing the City of Newport, this painting of the Transporter Bridge by Christopher Langley is a study of the bridge today, completed in a semi surrealist style. The bustling City of Newport in the background nestles under a summer setting sun.